I want to draw the shape of the waveform that stretches out from one point.
I tested it using ‘CreateEllipsoidMesh3DChartFragment’ from example source, but I found problem.

Is there a rule that connects coordinates when you draw a triangle?
Is there any way I can control this?

I have attached the image and code. 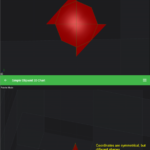 May I ask what shape are you trying to render?

By defaultFreeSurfaceRenderableSeries3D is defined as 2D mesh which contains M x N points ( you define them via constructor of data series ). In case of EllipsoidDataSeries3D they are evenly distributed to cover surface of ellipsoid so you don’t have control over where they are placed. The size of ellipsoid is defined by A, B and C params, in your case they all are equal to 6, so they form sphere with radius = 6. Then there is a displacement param which tells how to offset point relative to the surface of ellipsoid. If you set it to negative value it offsets point towards the center of ellipsoid ( by default it’s (0, 0, 0) point ), and vice versa if you specify positive offset. In you code you specify displacement = -6, which initially offsets all points to the (0, 0, 0) point ( ellipsoid has radius = 6 and with displament -6, it will become 0 ), then you override some of them to -1 and 1 values which will offset points at specified coordinates to 5 and 7 relative to the origin point, but others ( with displacement = -6) will remain at the origin point and as result won’t be rendered. That’s why you get such output.

Hope this explanation will help you!