How do I remove all padding around an Android Pie Chart?

I would like to be able to have a Pie Chart go to the very edge of the layout it’s inside. Currently it appears as though there is some default built-in padding around Pie Charts that cannot be overridden. I’ve tried manually specifying padding and margins both programmatically (on the SciChartSurface object itself) and in the layout XML, but that default padding still exists.

I’ve included a screenshot of the sample app to show the padding I’m talking about (circled in red). 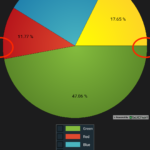 This happens because pie series reserves some space for shifting segments when you select them. If you don’t need this functionality then please try to set SelectedSegmentOffset = 0: