Upfront apologies – I suspect this is a bit of a complicated set of information I’m looking for, as the UI specs are rather strict on what we’re looking for.

I’m getting to the last few functionalities I need to test, and I believe I’ve proof of concepted nearly everything I need. and I suspect I know what needs to be customized for my requirements. I wasn’t exactly sure how to implement some parts though, and the documentation for the android tick provider suggested that I look for assistance.

My remaining goals are to have an X-axis that is…

Do you have an example of how to implement a custom tick provider/have any suggestions (also – please let me know if I’m barking up the wrong tree and I should be taking an entirely different approach). 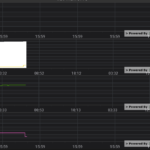 Thanks for the quick response!

I’m happy to hear 1 will be easy. I think I’m going to keep the charts separate, so that I can implement on press interactions for each of the charts (probably to expand them full screen).

For 2, I’ve tried setting major and minor deltas, and it’s always end up a bit funky for me.

A bit odd is I only see the initial data point, instead of each of the intervals. I suspect something I’m doing here is off, and I plan to poke around at this a bit more. The dummy data I’m giving it also spans several hours, so I would expect to see at least a few points. That said, the further complication is that the single point I see is at 13:57 – the labels need to be on the hour, rather than representative of the scope of the data. Attached is a screenshot of what I currently have, given the parameters above. Maybe I can put a dummy entry at the hour prior with all 0s, and that might make the starting value 13:00 instead of 13:57. Definitely a bit more investigation for me to do here, though it still sounds like I might need to customize the tick provider as per the example you’ve provided.

For 3, that sounds awesome. I thought the x-axis requirements are a bit of an edge case, and I’m happy that I can customize it.

Thanks for pointing me in the right direction – I’ll poke around a bit more at major/minor delta and label providers, and see where I can get. If that doesn’t pan out, I’ll try customizing the tick, according to the example you provided.

Thanks again for the help!
-Andy 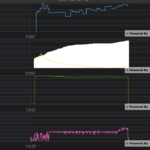