We are having an issue which is preventing us from upgrading to a newer version of Xamarin iOS SciChart.

With Xamarin iOS SciChart v3, the UpdateTicks method from SCINumericTickProvider cannot be overridden, because it doesn’t exist (at least not public).

In Xamarin Android SciChart v3, it works with overriding the UpdateTicks method.

In Xamarin iOS SciChart v2, it was possible to customize the ticks by overriding the method GetMajorTicksFromAxis from the class SCINumericTickProvider.

It looks like the types generation from iOS to Xamarin C# has missed to correctly export the UpdateTicks method as public overridable. (Because the docs say it should be there and it is there on Android Xamarin.)

Thanks for reporting this, now needed methods are exposed, and you can create custom TickProvider as per our documentation.
The fix is available in latest nightly build (v3.0.1.4889) which is available through the NuGet packages. Please try it out and let us know if that helps.

Thank you and sorry for the delay.

I tried to install the nuget version 3.0.1.4889, but I only get three options for older versions. I also checked the box for “preview versions” but that doesn’t change anything.

I attached a screenshot of the nuget window.

When I change the csproj file manually in a texteditor, replacing the old version number with 3.0.1.4889, visual studio shows an error which says that the version could not be found. 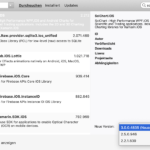