Rendering speed is much slower than in Google Chrome; scrolling is freezing.
Also there are several errors and warnings in console. 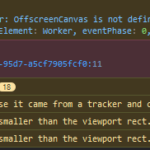 It is a known issue that rendering WebGL in Firefox is slower than in Chrome – https://stackoverflow.com/questions/62836595/webgl-performance-differences-between-firefox-and-chrome , also I created a task to investigate it regarding scichart.js https://abtsoftware.myjetbrains.com/youtrack/issue/SCJS-977

I can confirm we have some errors/warning in firefox, I created a task to sort it out https://abtsoftware.myjetbrains.com/youtrack/issue/SCJS-976 , but as far as I can see those errors/warnings are not critical and they do not break the app.

Actually it’s not the WebGL rendering alone in Firefox but also the rendering to final HTML5 canvas which is extremely slow.

There’s not a great deal we can do here. We have to draw the image to canvas. We can internally improve our performance as much as we like but if the browser implementation of key functions is poor then we’re stuck.

Talking of SciChart performance, we do have a build we are working on now that will massively improve rendering performance & text drawing performance but still will be subject to the same limitations as above. It will still perform better in Google chrome, which just has a superior implementation of key functions.

Update. I’ve commented on some of those Mozilla bugs above and we’re looking into any possible solutions on our side. They may take some time, working around a core function in a browser is a challenge.

Thanks for reporting!
-Andrew