The user is allowed to pan around/zoom around the heatmap.

I want to build two charts to display the ‘visible heatmap average’, one for each axis. For example, I would display a line chart underneath the heatmap. The first point on this line chart would represent the average value of all cells in the first column of the heatmap – I need this to take into account all of the UniformHeatmapDataSeries that are currently in the viewport, treating them as a singular heatmap.

I’ve seen the NumericAxis.getCurrentCoordinateCalculator(), which looks promising, but I’ve not yet worked out if that can do what I need.

Any thoughts on the best approach?

Please take a look at this example we just created. It has two UniformHeatmapDataSeries and one FastLineRenderableSeries with averages. Moreover there are checkboxes to show/hide a Heatmap Series and recalculate the averages – Heatmap Chart with Averages Demo

Let us know if this is what you were asking for. 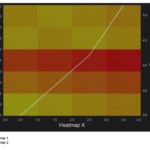