I’m trying to have constant sized column bars. As far as I know, the only property to change the X size of a bar is to use DataPointWidth which is a float between 0 and 1. It’s stated that it “Gets or sets the DataPointWidth, a value between 0.0 and 1.0 which defines the fraction of available space each column should occupy”.

But if I add two bars in the series, the available space shrinks, causing the bars to look thinner than the other series which only has 1 bar, creating an inconsistent look. It’s not a problem when I have equal number of bars in the series of course.

Is there a way to get around this problem, ideally I would have liked to have the DataPointWidth to accept the amount of X value it should be covering.

I’ve considered using the PalletteProvider with a single series, but it only returns Color, and I want to return Brush (for gradient effect). Also, I don’t want to change the border color. I couldn’t get it to work anyway, I’m probably missing something though,

But it didn’t even hit the break points, but since I wasn’t interested in solid colors, decided to not pursue that.

Edit: I’m using 3.3.0.5736v, I’ve added my PalletteProviderImplementation, I’ts not hitting any of those breakpoints. 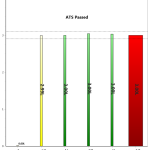 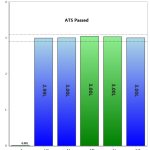 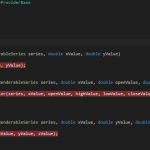 Unfotunately column series doesn’t support this behavior out of the box. But you could easily implement it by overriding GetColumnWidth method:

Then you just need to use it instead of FastColumnRenderabeSeries.