When rendering a FastLineRenderableSeries, there are line segments missing both before and after a double.NaN Y value. This makes sense for a regular line series, but for a step line series (where IsDigitalLine=True), why isn’t the line segment preceding the NaN being drawn? When plotting (for example) financial prices over time, the missing line before the NaN gives the impression that a price didn’t exist for that period, which is incorrect.

I’m looking at the IterateLines method in FastLinesHelper. Even though the method has an isDigitalLine parameter, it isn’t checked during the handling of a NaN value. Is this an oversight?

Sure, attached is a very small example of what I mean. In this case it is an FX rate vs time. data.txt is in CSV format, chart_current.png shows what SciChart is plotting now using a step line series (IsDigitalLine=True), and chart_expected.png shows the lines which we would like to be shown (and which some competitor chart controls already show).

The line should only be broken where the rate is unknown. But here for the time between 09:13:06.005 and 09:13:21.107, there is a known rate which isn’t being drawn. Anybody using the chart to look up a rate during this time would assume that one didn’t exist, which is incorrect.

I know that we could implement our own renderable series, but then we risk losing any improvements which you add to FastLinesHelper in the future. So is it please possible to update the drawing routine to include these lines, or provide an option on the series to draw them? 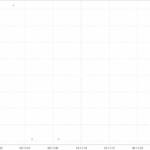 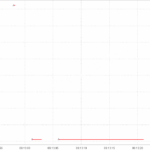