Update: Based on some other desired functionality about how the mouse should interact with this element, I’ve developed my own modifier to handle the roll-over functionality. As such, this ticket doesn’t need a reply any more. Thanks – and my apologies if it consumed any resources in the meantime!

This is a strange one. I am using seven XyScatterRenderableSeries on the one SciChart, in conjunction with a style for each of these to display seven different icons (in my case, I use path geometry or ellipses to define a full-circle, a circle with a divider down the middle or a circle split into three from the centre – each section then gets its own color).

Have a look at the attached screenshot for an idea of what it looks like – not a conventional chart by any means. The YAxis range is hard-coded in to only allow three possible values, whereas the XAxis is a Date axis and can allow values at any week. To allow the circles to sit where they are they are assigned a Y-coordinate of either 0.5, 1.5 or 2.5 (this allows them to sit between the gridllines I’ve defined in the xaml.

My problem is that the RolloverModifier is not following all of the RendereableSeries at all, and is acting strange and not providing me with a tooltip for some circles some of the time. It all seems very random.

Are RolloverModifiers working for multiple scatter series, where each series may have a different number of points to all others?

Note that it is possible in my example for one of the DataSeries to have two values (Y) for the one DateTime (X) as well.

I have attached some snippets of code – pasting it in here was not working for me, apologies!

If you require any further information, please let me know.

P.S. I had originally attempted to do this using your annotations example in the demo (with the Trade Markers for buy/sell). The Control Template I created to add the circles in and the looping that followed at run-time made rendering any sizeable number of these simply too expensive. Everything was slowing down. After going down this new route and using the SciChart itself to render everything – there are no performance issues at all! So bravo, whatever you’re doing to render geometries is paying dividends. Everything is very quick. 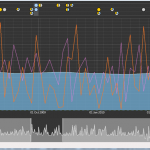 cool chart! Ok I think I know what’s going on here. The RolloverModifier internally performs a hit-test on all series, and aligns itself to the X-values of the series, before showing the Y-Values. Therefore, it assumes that data-points are located in the same position in the X-axis across all series. We’ve not tested it with series with varying or differing X-values.

It sounds to me like you may need a custom modifier to do this. Are you able to share any data we can use to test? Just a CSV file with X,Y values for the three top series and one of your main series. You can send me this on email if you want to keep it off the forum.