Is it possible to have a serie of datapoints with different colors?
I’ve got data, which are movements of the body, and I would like to disable 1 or more movements from it.
The user would see the same data, but a part of the series will be a different color, so the user will see the difference between an enabled and a disabled movement (see attachments).

Is this possible in SciChart and if so, how? 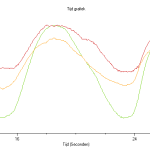 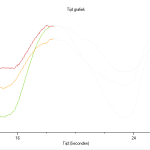 Yes it is possible, but only starting with SciChart v2. There is a feature in v1.x called the BaseRenderableSeries.PaletteProvider. This allows you to create a class which derives from IPaletteProvider which can be used to change the colours of points in a series, on a point by point basis.

In v1.x this only works with Column, Candlestick and OHLC series, but in v2 we have extended this to work with Line series. There is an example in the examples suite in the beta which demonstrates how to change the colours of lines. The example is called ‘UsePaletteProvider’.

Take a look and let me know what you think.