Upon your advice for a recent question, I have converted my annotations over to an XY scatter point series, using custom point markers to render them. That is working beautifully and is much faster than creating annotations as WPF UIElements. I now need to figure out if/how I can get the tooltips displaying like I would prefer.

I currently have a cursor modifier that I’m using to display a consolidated rollover tooltip for all of the visible series. However, now that the annotations are data series also, their information is getting included in this tooltip and I don’t want it to. I would like to have a separate tooltip that appears when the mouse is hovering over a custom point marker that displays the custom metadata for the point. This was the functionality I had working when I was creating the annotations as actual annotations. I’m hoping I can achieve it when creating them as regular data points.

So I guess my questions are: Is there a way to only include certain data series for a given chart modifier so I can keep my “regular” data and “annotation” data segregated? And, is there a way to show a tooltip with metadata only when the actual point is hovered? I was looking at the Series With Metadata example which is similar to what I want to achieve, but the tooltip appears whenever the mouse hovers over anything, not just when it’s over an actual point.

Hi Scott, in answer to your second question, how to improve the hit-test of markers, you can try this code:

This overrides the default hit-radius and allows 20 pixels for hit-testing. Please note that this will centre the hit-circle on the X Y datapoint so hovering directly above the marker will also cause a tooltip to show. However, it should decrease the sensitivity of the TooltipModifier and make the tooltips slightly more usable. 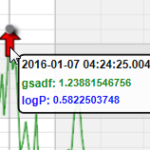 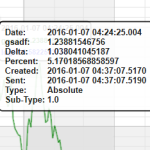 To exclude a series from the CursorModifier, you can use

To then include a series for the TooltipModifier instead, you can use

Finally, you can template the tooltip on a per-series basis by using the TooltipModifier.TooltipTemplate attached property. Full steps can be found in our TooltipModifier Documentation.