I have recently upgraded to SciChart 3 without major issues, but one thing that has changed is that the labels on my YAxes get cut-off beyond the minimum and maximum value. It’s a really weird behaviour and I have no idea what may be causing it. Please note that I do want to be able to display the ‘0’ label (that was the reason I updated to the newest version of SciChart). I’ve attached some screenshots that illustrate the problem. 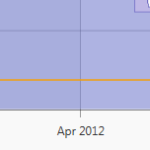 The problem wasn’t the graph exceeding its container, as the labels and other graph elements were displaying correctly within the entire graph area. The graph area is internally controlled by the SciChart object and the issue started appearing after I upgraded to the new version, so I knew it was something to do with the changes wihtin SciChart (which were outside of my control).

It turned out the cause of this was setting the WPF dependency property UsetLayoutRounding to False (the default is True). In the previous version of SciChart labels near the graph edges were removed, whereas from version 3.0 they are left to be drawn. The same problem would have occurred in the previous version too if it had allowed labels near the edges to be drawn. It was quite a tricky issue to track down, as just by coincidence it was “hidden” in the precious version and started occurring in the new one even though there was technically no change to the way labels are rendered.