We wanted to take a moment to thank our customers and supporters for the past year, as well as give you feedback on where we have been, and are planning to go as a business. In the past year SciChart has experienced 60% year on year growth, and we have some exciting plans for the future. Read on to find out more about SciChart – Annual Report and Roadmap – for 2016/2017.

SciChart: From Side Project to >$1m Revenue

SciChart began as a side project. Invented by one person, in spare time, pretty much in a bedroom! With no debt, or investors, SciChart began making High Performance WPF Chart components in early 2012. We created a Limited Company, and setup easy online payments with FastSpring, and our first customer bought online with a credit card. We still remember how shocked we were when the sales notification came through by email! We scrambled to issue the first license certificate – manually. That customer is still with us 5 years later (we also have a system to issue licenses now:))

In the first year (2012), SciChart sold a handful of licenses – 141 to be precise. We felt like our first version was quite frankly, terrible! It was a completely new WPF Charting library, promising to deliver high performance, interactive charts. Although it was new, and lacking in features, at the time it beat all known competitors in speed and performance, and then came a close second in a performance test with a rival shortly after our v1 release. This caused instant interest in what we had done. People began contacting us and asking for new features! SciChart v1 was new to the WPF Charting market, but we worked hard, listened to customer feedback and the chart library went through several iterations to quickly add new features that were requested by users in it’s first year. We are extremely grateful to our early adopters, who took a chance on us in those early years. Thank you!

At the time of writing, there are currently a running total of 3,400 developer licenses in the field for SciChart. We don’t know how many end-users are being served by this many developer licenses, however it is possible, that tens of thousands, or even hundreds of thousands, or maybe even millions(!) of people have seen or used a SciChart chart in an end-user application. We would love to know, so if you did want to give us feedback on where you are using SciChart and how many end-users you have, we would appreciate it!

In the days of Facebook and SnapChat, 3,400 licenses might not seem like a lot of users, but bear in mind we are talking about a niche, high value software product. SciChart isn’t a $0.99 app, nor a mass market application like Microsoft Word. It’s a niche product with a high value (ranging from $629 for a single license without support to $25,490 for a 2D+3D Charts site-license including tech support and source-code), so these sort of numbers for a small business in this field are very impressive.

In terms of revenue the figures are also looking strong, as average sale price has increased in 2016 with the advent of SciChart WPF 3D. In 2016 SciChart experienced a 49% increase in gross sales. That coupled with currency tailwinds, SciChart was able to achieve an impressive 60% year on year growth in gross, FX adjusted revenue in the fiscal year 2016.

At the end of the year there was just short of a running total of $3M USD of licensing sales for all time for SciChart, with over a third of the total all-time sales for SciChart occurring in 2016 alone. 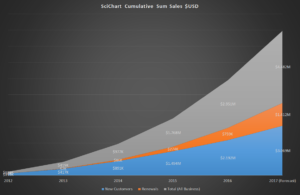 We predict growth to continue in the coming year, and using a simple linear regression forecast for new and repeat business, we predict a modest growth of 25-30% in 2017. We did have currencies in our favour in 2016 following the UK EU Referendum and we don’t anticipate the same happening again.

It should be pointed out that even no-growth would be a good result. We’re living within our means and intend to be around for a while yet! We love what we do and enjoy making high quality chart components. We are re-investing in making them even better in 2017 and hope you enjoy using our software as much as we enjoy making it.

In the past year we have made a step to expand into iOS Charts & Android Charts. Our aim is to produce high-quality, realtime 2D & 3D Charts on the the WPF platform as well as mobile platforms, as well as Xamarin Charts as other hybrid frameworks. This is an effort to diversify and essentially ‘future proof’ our company.

Below you can see the breakdown of sales by platform for SciChart. In 2015 our sales were predominantly made up of WPF 2D Charts. In 2016, SciChart’ WPF 3D Charts have made a considerable impact on sales, and the new 3D Charting product was a runaway success throughout the past year. iOS & Android platforms were released in June/July of 2016, there has been a small, but significant uptake of early adopters for our charts on these mobile platforms. 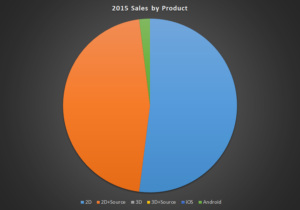 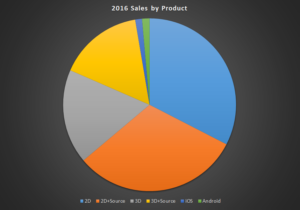 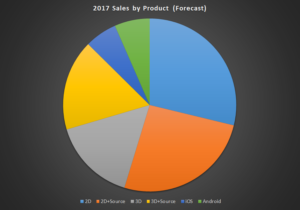 Using a forecasting model we hope iOS & Android chart sales will grow significantly in 2017 as we introduce v2.0 of our mobile charts, as well as Xamarin Charts Bindings support. However, our business will be predominantly Windows-based for the time being. As a result we have and will be committed to invest the majority of profits into development for WPF Charts (Windows) in order to support our still growing user-base on this platform.

We are even considering to expand SciChart Windows to cover WinForms – I know that seems like a step backwards, but it seems like this platform is still very popular. Also UWP, which is more forward looking. Microsoft certainly seems to be investing in it. We would be interested to hear from customers who are looking for either of these two platforms, and whether they would influence buying decisions were we to build them.

The company – SciChart Ltd – is operated as a bootstrapped ‘lean startup’, meaning, it has no debt, no investors, other than the founders, and re-invests a proportion of profits. The company has been in profit every year since 2012 and we have carefully expanded with minimal overheads and risk. Right now we have a team of 12 developers, these are split across platforms WPF (7), iOS (3) and Android (2) as well as a handful of full or part-time staff for graphic design, sales and systems management. We have almost doubled our team size in the past year. We don’t have a single centralised office – our team is distributed. While we are headquartered in London, UK, we are embracing the modern world by utilising high speed internet communications to allow our team to work remotely. This enables us to be flexible, productive and above all – agile – in a rapidly changing world.

We are as surprised as you are to see SciChart to grow from a side-project into a real small enterprise, starting with one part-time staff member, now with 14 full & part time staff, with customers in over forty countries, and over 3,400 developers worldwide and countless (unknown!) end users using Applications with charts powered by SciChart. It is our aim to grow the company even further and to become the Market Leader in cross-platform native charts over the coming years and we hope to capitalise on our expertise to deliver you better value and a higher level of service in the future.

The Vision for SciChart in 2017 and Beyond

If you want to see where we plan to go with SciChart in the next one or two years, please take a look at our Roadmap: 2017 the Vision for SciChart.

We could keep this secret, and we’ve thought about it. Showing your hand is sometimes not a good idea. What we wanted to do was be transparent to our customer base, who we feel like are partners in our business as they have taken the step to invest in our products and services. We also want to assure both current and future customers that the business is both strong and growing. WPF isn’t going anywhere, and SciChart isn’t going anywhere either!

Currently SciChart is entirely self-funded, and has no debt or investors, other than the founders. We are considering a limited, private offering of equity capital in order to grow or expand more quickly. If this is an area of your expertise, or, if you would like to mentor us as a tech growth company, or could put us in touch with someone who can, please contact us.

Thank you to our Customers and Supporters

We are lucky to have some of the most loyal, helpful customers in the market. We are always pleased to hear your feedback, your suggestions for the product. We get a lot of referrals and we really appreciate your advocacy and support of SciChart.

Please tell us how we’re doing. We want to recommit to the values of serving you, our customers. If we are doing well, or even if we are not, please contact us and give us your feedback!

Our Commitment to Excellence during Covid-19

We wanted to write a short note to our customers, past present & future to take a moment share our […]
Read More

Today we have an exciting announcement to make about SciChart: High Performance Realtime Charts! After years of researching and developing […]
Read More