I recently updated 2 different apps that both use SciChart with XCode14 and uploaded the archives to the App Store via Organizer. They both generated the warning/error:

This did not occur with Xcode 13.

Any advice on how best to handle this? 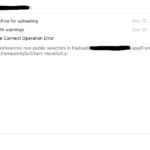 According to developer.apple.com/forums/thread/714736 this seems to be a bug in the validation on Apple side and is affecting a number of third party libraries.

It’s a bug in the validation that runs on the backend. It’s a warning, not an error, so binary distribution is possible. I’ve already filed a bug on the Feedback Assistant (FB11488329) for this issue. developer.apple.com/forums/thread/713574 — mario25 2 months ago

One user has reported

This problem occurs even with CoreData generated source code. For example the following extension (generated from Xcode) causes similar warnings:

Multiple users are reporting this error with other third party libraries (not scichart) and say the warning can be ignored and app continue to be published.

If you continue to have problems I suggest to comment on the forum threads above on developer.apple.com. If there is specific guidance from Apple on how to adjust our library we would be happy to do it.

Thanks for the response. Cleaning derived data didn’t resolve the problem. I’ll look into more in a couple of days, and report back whatever I find.

Quick Update: I tried adding the sciChart framework to one of my projects that does not use it (no Scichart API calls). With Xcode 14 (Version 14.0 (14A309)) I got the same error. With Xcode 13, it processed fine. When I removed the framework, it uploaded fine again with xCode14. 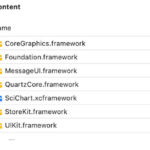 I’m getting same error too after updating Xcode 14.

Enre, thanks for posting that – I’m glad I’m not alone. I am still getting the error. Fortunately, updates and releases seem to still be going through the App Store as usual even with the error.