To whom this may concern:

I am following up to an issue that I posted a few years ago: https://www.scichart.com/questions/wpf/resizing-custom-annotations

I’ve attached a sample project that outlines what I am trying to accomplish. It is a simple scatter chart with randomized points in which I am trying to draw a rotatable ellipse annotation around the points.

The issue is when re-sizing the annotation, and then attempting to rotate the ellipse again, the ellipse is clipped by the bounds of the annotation, even though “ClipToBounds” is set to false (in the code-behind). Unfortunately, I can’t find a pattern for which this occurs, and I have no solution to this issue. Examples of the clipped and non-clipped ellipses are shown in the attached images.

Hopefully the attached project is easy to understand. Can you please advise? 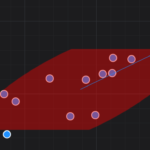 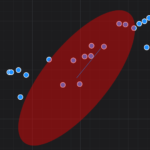 Thanks for your inquiry.
Unfortunately, we cannot help much with this issue. Probably the issue lies in your template and how you’ve implemented rotation of the custom annotation. We can suggest using WPF Snoop to debug the VisualTree of your annotation. Please take a look:
https://github.com/snoopwpf/snoopwpf/releases

Please try this tool, it is very helpful to understand what is going on in such cases.