More than one stroke thickness on a single series

I saw in the examples where a “gain” and “loss” affected the color of a series. This took a bit of time; however, I figured out was you were doing and was able to implement it.

Please see the attached image. There are 2 sections in my series that are “Green” whereas the remainder of the series is gray. I’d like to be able to do 2 things ONLY to the green area. 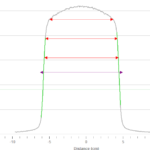 Similarly, to show pointmarkers at some places and not others, simply have another

with the X,Y points you want to show.

If you would really like to do all the above in a single series, it is also possible using the Custom Series API, however the above is simpler.