I have experienced some rendering issues with data series containing lots of NaN’s.

I have attached a test project and a couple of screenshots / a video.

It is a chart with the following setup:

The series are updated 10 times per second with random y values. Some of the values are randomly made NaN’s.

After about 10 – 12 minutes (~6000 datapoints per series) the chart stops showing new data.
Zooming into the chart makes all of the series visible again.

If I lower the frequency of NaN’s the issue appears after a longer time.
If I do not insert NaN values the chart performs as excepted.

The first screenshot is after ~10 – 11 minutes – everything is fine.
The second screenshot is ~2 minute after – it does not render the last part of the series.
The video shows some panning and zooming. 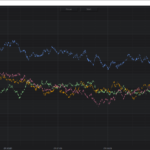 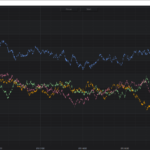 I’m betting this is related to this issue which was fixed in SciChart v5.0: https://www.scichart.com/scichart-wpf-v5-released/

Our resampler algorithms have been re-written using C++ for enhanced
resolution, speed and efficiency. Long standing problems solved
include:

To enable this feature, you have to follow the steps here. It is not enabled by default as it requires native code which might cause problems on some machines.

Let me know if this helps!

Thank you – it solved the rendering issues.

Do you have any info on what impact different ResamplingPrecision values has on the chart performance?

..and what kind of problems could the use of native code give?