I am using XyDataSeries<double, double> and when the chart receives data it can happen that the user stops accepting data and wants to resume recording data at a later point. Just like a doctor taking a EEG. He starts the printout and then stops. Tells the patient to do something and resumes the printout. Then he sees the 2 recordings side by side. Separated by a vertical line – no gaps. Thats what I want to achieve. But currently my chart looks like this.
What do I have to set to get the desired result? (Ignore missing values inbetween if all series don’t have data.
I was also already making an annotation which worked until I included the stop in appending. Now I don’t see the annotation any more but my real problem is that I want to have no gap. The drawing of the lines should resume at the point where it stopped before.
I tried unsorteddata but no change. And I was looking for an unevenlySpaced property but there was none to my series. 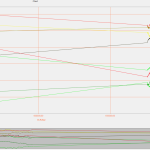 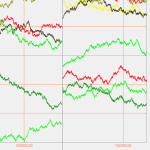 See comments to Andrews answer. The answer for my use case seems to be: