I have a SciChart with multiple y-axes. Thanks to the ZoomPanModifier the user can pan the whole chart by dragging (holding the left mouse button down and moving the mouse). Good! But it should also be possible for the user to pan a certain axis (meaning : changing the min and max values of the axis) and that doesn’t seem to be possible with the built-in ChartModifiers.

So then I thought, no problem, I make my own ChartModifier to handle this (I already implemented two other modifiers for other mouse interactions before, so I get the hang of this :-)). But I don’t get this to work correctly.

Can someone give me a tip on how to proceed or does someone already have a solution for this ? Thanks for any help in advance. 🙂 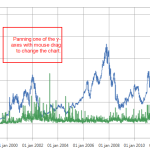 If you wanted to go one further you could create your own ChartModifier (as you have done) to pan a single axis. Please see our tutorial on Creating a Custom ZoomPanModifier. If you take this code (found in the first tutorial) and add an AxisId DependencyProperty you could make it generic to filter on a specific axis by using the ChartModifierBase.GetYAxis(string id) and GetXAxis methods.

here my code if other people later want to have some similar dragging behavior. Works with a flexible collection of x-axes and y-axis (although I only tested with one x-axis). Please feel free to use the code.