I’m evaluating the WPF chart and have an issue when using series binding. In our first test app we added a series directly via code and that worked.

Now I’m using binding and have an issue with the series and gridlines not displaying.

I’m fairly confident it is binding because I can move the CursorModifier around on the chart and see appropriate tooltips which match the data I would expect to see given the XY axes.

Also, before binding a series the chart shows the gridlines correctly. Only after I bind a series does the lines disappear and the series to not draw.

I’ve attached the source, the XAML styles I’m using and images between a grid that looks correct (no series bound) and one that is invisible (IS bound).

UPDATE: in this application even normal series won’t work. I’m using the same method I used in my original test application of adding to a series using the var series = new XyDataSeries<double, decimal>(); and appending points to a series I’ve predefined on the chart in the XAML file. 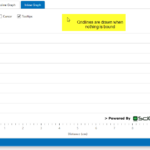 I figured it out.

has to be used, not <double, decimal>.