X-Axes are not aligned between synchronized charts, bug?

I have two charts (separate SciChartSurface via SciChartGroup) stacked on top of each other. Each chart has its own X-Axis and both charts’ mouse interaction are linked via MouseGroupId. All fine so far.

Expected behavior is that the series2 will be shifted by 2 hours and not start at the same position as series1 but rather extend by 2 hours. That is, however, not the case on my chart.

What is wrong here and is this a potential bug?

I need both XAxes to be perfectly aligned, meaning the cross hair label on each XAxis displays the exact same time stamp. Please note that I customized the LabelProvider to display milliseconds also, but I use the same Label Provider for both charts, so no difference here.

Can someone please chime in what is going on?

Please see attached charts to illustrate what I have been describing (screenshot1 shows intended behavior but on the same chart, I want this behavior to occur on separate panes/charts). Screenshot 2 describes the problem I am having. 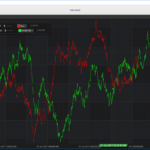 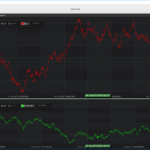 How have you synchronised the two charts?

In our documentation we demonstrate you need to set MouseManager.MouseEventGroup to share the events, and also bind XAxis.VisibleRange TwoWay to a common view model property.

Let me know if this helps,

Second suggestion. Are you using CategoryDateTimeAxis?

If YES then this axis type expects both series to have the same number of data-points. One way you can solve this is to pad the data-series with Y=Double.NaN before data starts. Another way is to use DateTimeAxis, or … in v5 the upcoming DiscontinuousDateTimeAxis.